Pairing High-Proof Sour Mash With Our Favorite Part Of Swine

Like Bourbon, bacon has yet to reach the zenith of its popularity, and for good reason. Few cuts of any meat are so versatile to be eaten solo or added to any sandwich, soup, casserole, fish, fowl … you name it, bacon benefits the whole. So why not pair it with whiskey—directly, as in neat—we asked? A mashup of two Kentucky traditions is simple, impactful on the palate and mutually beneficial in revealing the best characteristics of each other.

Let’s state clearly that there really are no bad bacon and whiskey pairings, but some are clearly better than others. Some of the bacons we tried were so powerfully smoky that they obliterated nearly all the whiskey flavor from some respectably high-proof pours. Sometimes it went the other way, as some whiskeys scrubbed the palate clean of any trace of salt-cured pork.

So in the interests of science and recreation, we conducted some informal bacon and Bourbon pairings we to share with you. Here’s what we found! 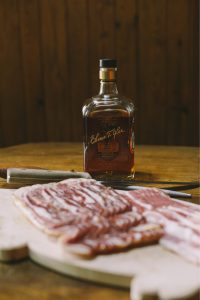 Located in Kuttawa, Ky., Broadbent’s has been in business 52 years as a curer of bacon and country hams. This version of owners Beth and Ronnie Drennan’s bacon was lightly smoked with hickory, though they do an Applewood-smoked version as well. Both can be ordered online at broadbenthams.com.

A mild and semi-lean bacon requires a mild and light bodied whiskey, so we settled on Elmer T. Lee.

At 93 proof, the highly sought-after Buffalo Trace-made bourbon was the ideal mild-meets-sweet mashup, bringing just enough rye in BT’s mash bill #2 (12-15% rye) to cut through the bacon’s fat, without overpowering the whole. 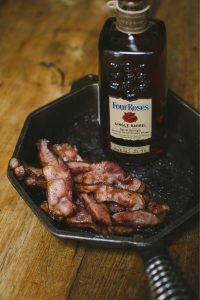 When R.C. Nueske couldn’t find smoked bacon to suit his standards, he opened an eponymous business in 1933 to make and sell his own. The Wittenberg, Wis., store sells a wide variety of smoked meats, which you can order online at nueskes.com.

This bacon pulled even more flavor out from this already highly acclaimed Bourbon bottling and seemed to amplify the apricot notes specifically. This bacon would be a great pairing with any OESF recipe barrel-pick available in a liquor store or from the Four Roses Distillery Gift Shop. 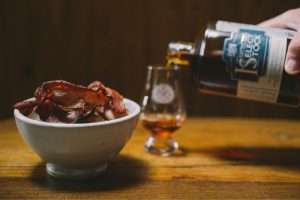 That this bacon isn’t salt-cured doesn’t mean it lacks flavor. The use of habanero peppers in the rub gives it plenty of pizzazz, especially when tasted with high-proof bourbon. You can order this bacon online at www.tenderbelly.com.

This eccentric bacon paired well with this eccentric whiskey. The habanero flavor was very prevalent on this bacon, but when it was mixed with the HH Cognac Finish the heat of the spice toned down and contributed to the taste of the whiskey. 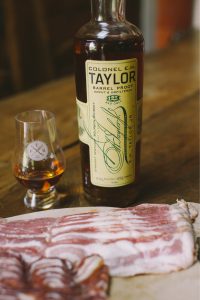 Nearly a century ago, Sam Edwards, II, founded this venerable pork curing operation in Surry, Va., and many of its products are viewed as the gold standard for smoked bacon and country ham. Edwards’ country bacon is hickory-smoked and sliced medium-thick for a rustic presentation. You can order this bacon online at www.edwardsvaham.com.

This bacon was very crunchy, so much that it was almost more like eating juicy pork rinds. The ultra- crispy texture produced some oaky nut notes that paired very well with the bold, E.H. Taylor Barrel Strength we had on hand. 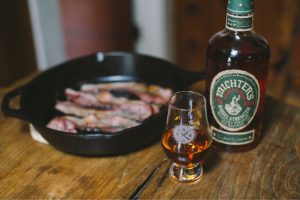 The Nueske patriarch passed down generations of family secrets for selecting cuts that were both tender and lean. This all natural and subtly sweet bacon is smoked 24 hours over cherrywood logs. You can order online at www.nueskes.com.

The peppery whiskey paired perfectly with the well-balanced and slightly sweet flavor of this bacon, which created a crème brulee like finish. 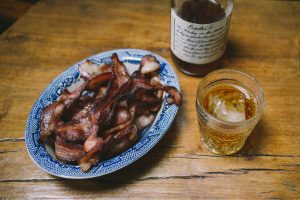 This relatively new Denver, Colo., curer of heritage-breed pigs utilizes maple syrup along with tangy spices and cherry wood smoke to produce an incredibly unique flavor and chew in this bacon. You can order this bacon online at www.tenderbelly.com.

If you enjoy big-sliced bacon with big flavor, then you might as well pair it with a big Bourbon. This Tender Belly is the bacon you dream about. It’s a thicker than normal cut and is packed with juicy flavor once it’s cooked. We found notes of cinnamon also with the addition of Bookers while enjoying this bacon.

We’d like to extend a thank you to all our bacon purveyors, as well as our taste testing team, including our friends Steven Tever and John Fischer of Four Seasons Vail, and our own Justin Sloan, Justin Thompson, and Will Gray. Find your favorite Bourbon and bacon pairing at home!