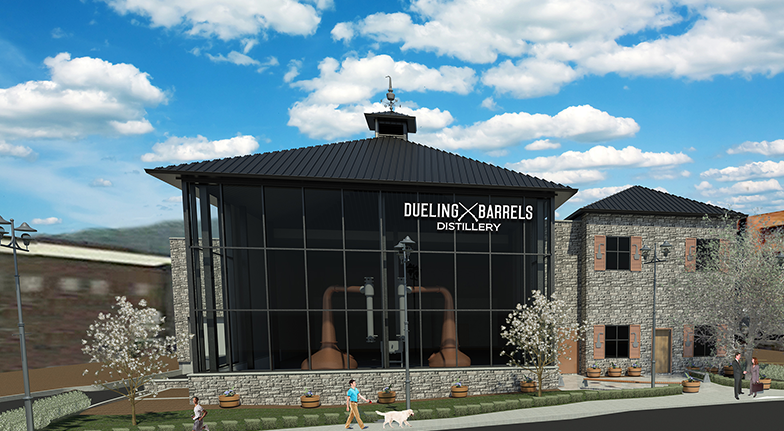 Converting corn to corn liquor is nothing new to Kentucky’s Appalachia.  We have been perfecting the process for centuries.  It is in our blood.  It is in our culture.  When we tell you we “might” know where you can get moonshine what we really mean is can you be trusted?  Are you worthy to share a gulp from a mason jar secreted in the back of granny’s cupboard?  If we like you, we “might” know a place on a crooked little holler road where you can get more.  We “might” introduce you to a friend of a friend.

But soon you will not have to have clandestine connections to procure mountain moonshine, whiskey and ale.   Alltech’s Dueling Barrels distillery broke ground in Pikeville, KY this week.

I have seen the shovels.  I have gazed upon the artist’s renderings which strongly reference Alltech’s Town Branch facility in Lexington.  I have heard the speeches.   My pointy toed shoes have walked the construction site, getting a little scuffed and dusty but still ready to do an Irish gig.  Anytime there is good news in Kentucky’s Appalachia, I do a little dance.

In a community rapidly losing coal industry jobs, at a time when our Appalachian region is transitioning to an economy driven by tourism the arrival of a 13 million dollar project to our hometown signals hope.   Promised to be the easternmost destination on the Kentucky Bourbon Trail, the distillery is sure to pour out changes upon the mountain region.

In fact the changes are already evident.  Jenny Wiley Theatre has opened a location adjacent to the distillery’s Second Street location.  Around the corner, Roasted Coffee and Café serves up panni sandwiches and gourmet coffee including Alltech’s Café Citadelle brand.  Upscale restaurants and watering holes like The Blue Raven and Bank 253 have polished their menus and broadened their already deep selections of Kentucky bourbons.  New restaurants and pubs are on the drawing boards.  Businesses, artists, and the local farmers market are strategizing on how best to capture tourists fancy.  There is a good buzz in town and we have not even had a sip!

Alltech rolled out Pikeville Porter last fall to build anticipation for the 2017 distillery opening.  Additionally a moonshine and a bourbon sporting the brand’s label will be launched.  Apparently, Pikeville Ale is also on the way.    No news yet on just what the flavor profile of the Pikeville distillery’s signature product will be.  However, Alltech’s Town Branch Bourbon is noted for a dry spicy finish, credited in part to a mashbill that features malted barley.

The brainchild of Pearse Lyons and former Kentucky Governor Paul Patton, Dueling Barrels Distillery fires a shot in the right direction.   The distillery name is a clever play on the infamous Hatfield and McCoy feud that occurred along the Kentucky and West Virginia border in the late 1800’s.  The new building will stand in the shadow of the mountain where Rosa McCoy was laid to rest and a few blocks from the McCoy home place.

History is watching.  Our residents hope history is being made.

Lyons, an Irish born biochemist, claims a strong connection to the people of the mountains.  Many Pikeville residents share the surnames of kinfolks back in Ireland.   Sporting a jaunty bowtie and a crisp straw hat, Lyons waxes poetic as he compares and contrasts the two peoples and two regions so distant yet so tightly intertwined.

Alltech’s Dueling Barrels may be a melding of Irish entrepreneurship and Kentucky libations, but at the groundbreaking they served champagne flutes to celebrate.   As for me, I will still be drinking my ‘shine from a mason jar.  However, soon I will be able share a little sip of Pikeville’s Dueling Barrels with the whole world and it will be a secret no longer.   Hillbillies going global.   Good news for Kentucky’s coalfields.    And that my friends is something to cheer about.