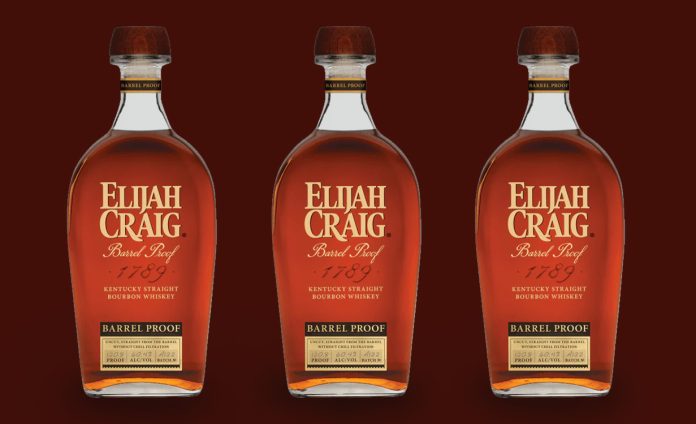 With respect to Billie Joe Armstrong, you’ll always want to wake a bourbon lover when September begins. Heritage month and limited release season: they’re reason enough to embrace an early bird bourbon lifestyle. But the release of the final Elijah Craig Barrel Proof Bourbon batch of the year is the everyman’s cue to get searching—and for me to get reviewing.

Barrel Proof is a three-bottle release that sticks with its strict calendar with a reliability not seen from many distilleries these days. Their releases hit shelves in January, May and September each year as close to clockwork as is permitted in the sleepy world of whiskey maturation and packaging.

People love the stuff. Frankly, I believe it’s largely tied to the high proof points this collection is known for. It’s not unusual for ECBP as it’s sometimes abbreviated to range from the high one-teens into the one-thirties, and at an age-stated 12 years, there’s plenty to be said for its maturity as well.

Prices vary—while Heaven Hill still claims a suggested retail price of $60, regular drinkers aren’t likely to find that, even before taxes. But ECBP is still a relatively affordable bottle in 2022 numbers even with after market. That’s especially true if you get the right one.

There are a lot of reasons to love ECBP, but truth be told, the best and worst part of this collection is the variety. The large proof swings can be just one of the ways these whiskeys vary batch to batch, year to year.

This was an unusual year for proof (as many of the last few have been). Heaven Hill trended their proof lower this year in general, with the first two releases kept at or below a respectable 121 proof. It wasn’t until September’s batch C-922 that the numbers spiked up to a still comparably modest 124.8. That’s more than 10 points down from the 136.6-proof bottle released in 2020 (and nowhere near the one released half a decade ago that topped out at over 139.

Proof shouldn’t be a factor in quality in and of itself, but even the best critic will have to acknowledge that a high-test whiskey that drinks like syrup deserves a special star.

Want to know what the code means on your bottle? The letters A, B, or C always start it which signal 1st, 2nd, or 3rd release of the year. Following is a number (1,5, or 9) which represent the release month, and the last 2 digits are the year of release.

So could the highest proof bottle be the best this year? In the past, that’s been the case on more than one occasion. In 2022, it’s another story.

A fragrant nose of vanilla and orange leads to a thin and spicy bourbon. Dry notes of rye spice are decorated with coffee and hazelnut, but the peppery grain and alcohol notes dominate.

Texture is another story—sweet corn and creamy tendrils of vanilla move around the palate. It would be delicious, save for the proof buzzing in your head the entire time, like a headache. Water is sorely needed with this one, and it brings some lightness to the party and amplifies elements of sweetness and those hints of orange.

This surprisingly grain forward bourbon smacks of orange and lemon peels, but hints of state fair lemonade and creamsicle leave some balance to be desired. Also to be desired: some depth to the nose, which is relatively subdued.

But back to the palate: it’s a sweet and bright whiskey over all, and time has been gentle with it in terms of oak influence. Caramel is present and accounted for as things evolve, with some lovely baking spices, before an effervescent finish. Water messes with the balance, highlights the baking spices, and elongates the oak.

A big, bountiful nose of rye and vanilla tea doesn’t quit surprising until you discover the hint of peanut butter. It leads to a big day of Sunday baking flavors. Chocolate, nutmeg, cinnamon—they all linger as the palate is loaded with fudgy oak sweetness.

The finish is well-balanced, buttery, abundantly sweet and subtly spicy, with earthy hints of cola popping off throughout an oily, well-coated palate. Water makes the whole experience slightly more syrupy, but to be honest, there wasn’t much need in the way of alterations. But I had to convince myself to add water in the first place—who in their right mind tries to “touch up” Starry Night?

A great ECBP only needs to do a few things to be great: drink well at proof, hint at cocoa, and acknowledge its 12-year age. If you’re doing all of that, you’re a great batch.

This is the second year in a row that the “A” batch has taken the top spot. What these two bottles have had in common with previous releases and award-winners is those central flavors that makeup the DNA of Elijah Craig: coffee, cocoa, baking spices.

Personally, I’m glad to have had a couple of years of more modest proof points. While the 130s are a fun range, it’s nice for Heaven Hill to remind us that they can do great things without pushing the limits of comfort. Don’t get me wrong: if I see 139 proof in January, I’ll be just excited as everyone else.

For now, though, I’m comfortable nursing batch A-122. Get your hands on it if you can. Happy hunting.