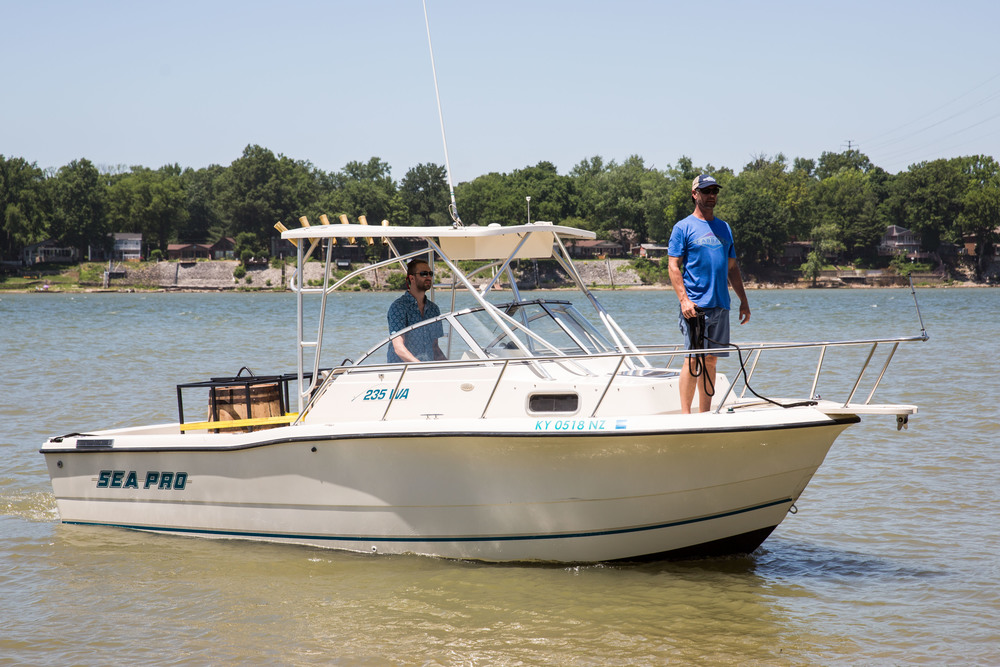 There are those who read about history, those who go see it, and those who set out to reenact it. Count Trey Zoeller among the latter group.

On June 6, the owner of Jefferson’s Bourbon and his captain, Ted Gray, pushed away from an Ohio River dock at Louisville, Ky., to start a four-month trip to New York, drifting southward through a series of waterways en route to New Orleans.

Yes, drifting. At 3 to 5 knots. Just like the bourbon runners of yore did centuries ago. The Coast Guard insisted the boat be powered in order to navigate the complex system of locks along the way, but the engine will only idle on the journey to facilitate steering.

On the bow of their 23-foot Sea Pro craft rests two newly filled barrels of Jefferson’s bourbon, fresh off the line from Kentucky Artisan Distillery. (In case you’re wondering, they’re caged in metal for safety, but exposed to the elements.) A small cabin below the bow is the pair’s refuge from rain and sun along the way.

“I’ve had this idea for about three years,” Zoeller begins, “to do something that hasn’t been done in 150 years. And as you can imagine, the TTB and the Coast Guard were skeptical … their first reaction was, ‘No.’”

But he talked them into it, promised them the whole thing was one part adventure (to relive history) and one part experiment (to taste the effects of water jostling and exposure to the elements on the whiskey), and that whiskey would never be sold.

“We had to help them understand that it’s not a commercial project, that it’s a reenactment,” Zoeller says. “I love history, and I really believe that a big reason why bourbon proliferated in Kentucky was our access to waterways. Nobody else had so many routes to get it to market like we did.”

Zoeller concedes that calling the voyage a reenactment is a slight stretch. The route bears many modern safety features not afforded courageous riverboat captains in the past. The men will not course the mighty Mississippi River as their predecessors did in the 1800s. Instead, they’ll take the Ohio River southwestward to Western Kentucky and turn due south into the Tennessee River. They’ll stay with that channel until crossing into Mississippi and then flow into the Tennessee-Tombigbee Waterway, a complex channel of man-made links to multiple waterways in Mississippi and Alabama. Once into Alabama, they’ll pick up the Tombigbee River, followed by the Alabama River, which spills into Mobile Bay at the Gulf of Mexico. From there the men will motor eastward to New Orleans for a brief stop, ending what Zoeller expects to be a 45-day trip.

As the hired captain, Gray will stay with the boat the entire journey while Zoeller, tending to his bourbon business, will come aboard and depart at various stops. The men will also stay ashore each night.

The ride will, of course, be exceptionally unsettling for the bourbon, which is exactly what Zoeller wants most.

“It will be exposed to the sun, and riding all that way on the water will agitate it a lot,” says Zoeller. He expects the net effect will be similar to the jostling given years ago to his popular Jefferson’s Oceans bourbon. But this bourbon will have traveled a truly historic route. “I want to taste what people were drinking back then and understand why they said, ‘We want this from Kentucky and we’ll pay a lot more for it.’”

Zoeller said the bourbon will be bottled soon after the September landing because he wants no further aging. That short time in the barrel “puts it as close to the real thing as possible,” he says.

Sadly, for the curious who also are interested in tasting “the real thing,” those bottles will never be sold; they’ll be auctioned off for the benefit of a yet-undetermined charity.

“I’ve named the barrels Fantastic Voyage, but nothing for the bourbon yet,” he says. “Maybe Kentucky Experiment, I don’t know. I do know we’ll have plenty of time to think about it as we’re traveling at 3 knots on the water.”