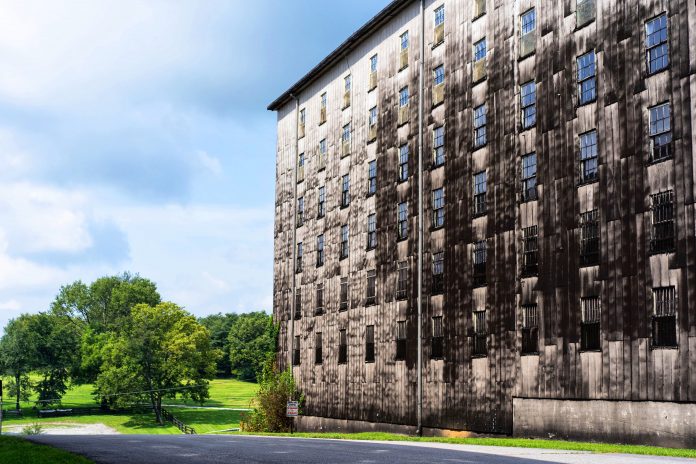 About ten miles north of Heaven Hill’s main Bardstown campus sits the former home of the T.W. Samuels distillery. Today it houses nine Heaven Hill rickhouses, some as old as 80 years, each with unique tiered roofs, all identified by double-letters:  AA, BB, CC, and so on. Now known simply as “Deatsville,” this location had been the home to master distiller Parker Beam’s favorite warehouses, and it’s where the 11th edition of the Parker’s Heritage Collection, released just after his 2017 death, had been drawn from. That same year, the Bourbon Crusaders—a noted barrel buying group—picked an Elijah Craig private barrel from Deatsville. Bottles of this incredible 10-year-old bourbon became highly sought-after online, and Deatsville’s reputation was further burnished.

“That kind of began this focus on it,” explains Brett Atlas, a writer for Bourbon + Banter who has helped pick a lot of private barrels over the years. He agrees that the absolute best Elijah Craig barrels, if not overall Heaven Hill whiskeys, come out of Deatsville. “I think the oak is more pronounced along with a syrupy sweetness that just gives it a complexity the regular small batch doesn’t have.”

As single barrel picking becomes more and more of an obsession amongst the cognoscenti, those in the know have started to believe each of the major Kentucky brands have certain warehouses that are just better than others. Because of this, certain single barrel bottles have started selling for high prices on the secondary market, well before any one has ever even tasted them, simply on the basis of the location they were picked from. Whether one can actually predict the quality of a single barrel purely by its aging location is certainly up for debate—even amongst the brand’s own distillers—but what’s not is the mythos that comes to be associated with certain warehouses.

As with most aspects of today’s bourbon business, Buffalo Trace is also the king of hyped single barrels, offering four options:  the flagship Buffalo Trace which is typically aged on middle floors amongst several warehouses, Eagle Rare which ages on mid-lower floors, Weller which ages on mid-high floors in several warehouses, and Blanton’s which strictly ages in Warehouse H, literally built by Albert Blanton in 1934.

“That being said, many people like Warehouse C which was built by E.H. Taylor and is our oldest warehouse at Buffalo Trace,” explains Beckman. “And others like Warehouse L which harbors some Pappy barrels on the lower floors.”

Unfortunately, many avid single barrel buyers I spoke to said it doesn’t really matter what they like—when it comes to Buffalo Trace, you pretty much get whatever barrels are scheduled to roll out for that particular day. Not the biggest surprise considering how desirable they are. However, other distilleries seem more willing to work with single barrel buyers on what location they want to buy from, like Wild Turkey, where there seems to be no debate as to what is their best warehouse.

Dixon Dedman agrees. The owner of the Beaumont Inn—and founder of Kentucky Owl—recently picked three Russell’s Reserves barrels from Camp Nelson, a location Wild Turkey has been using since at least the late-1990s, but which it has only been identifying on single barrels as “Camp Nelson” since last year or so. Wild Turkey enthusiast David Jennings—who blogs about his passion at RareBird101.com—is another “CNF” fan, claiming it’s “cool for its uniqueness.” He believes that CNF offers a “crazy complexity,” one that often lends to the “funky” notes many drinkers get in ballyhooed Wild Turkey dusties from the past.

Jennings is quick to note he’s also a fan of Tyrone G and B, two warehouses that Wild Turkey is currently not drawing single barrels from at the moment. In fact, as of this moment, Camp Nelson A and F are pickers’ only choices. Master distiller Eddie Russell hasrevealedthat 2020 will see more diversity in warehouses that buyers can choose from, and the brand will begin offering options in Tyrone A, B, G, and K, as well as Camp Nelson C. Jennings, for one, is excited about the possibilities.

“‘Better’ is relative to the individual,” he notes, “but honestly, some of my favorite single barrels came from non-favorite rickhouses.”

Of course, Wild Turkey only has a single bourbon mashbill, so variance amongst single barrels could easily be attributed to where they aged. But how to account for location when it comes to a brand like Four Roses, which offers ten different recipes based on mash bill and yeast combinations (ranging from the spicy OBSK to the floral OESQ to the fruity OESO). According to Atlas, that leads to constantly changing desirables which seem to vary from year to year.

“There’s generally a run of recipes and specific locations that become hot and everyone chases after them,” he explains, before speaking in a jargon that only the most knowledgeable single barrel seekers would even understand. “There was a craze over the OESV PS 26 high tiers, specifically 6th tier”—meaning: barrels with the recipe OESV, from the warehouse P, on the south side (“S”), and from the 26th rack (out of 180)—“Recently the LE mid-tiers have been solid. OBSV ME high-tier were very popular and then MW became solid. OBSO LW 47 low tiers have been nice [over] the last year and surprisingly the OESQ TN 32 low-tiers are as well.”

Brent Elliott, Four Roses master distiller, is generally not a believer in the importance of location to the quality of a single barrel. Especially since, as he often notes, Four Roses is unique in that they age all their barrels in single-story warehouses (thus, why Atlas speaks of “tiers”) which are all made of the same materials and located on the same Coxs Creek property at the very same elevation.

“We intentionally provide a similar environment for all our barrels so that there are no quality differences from warehouse to warehouse,” Elliott says. “I explain this to people all the time, and yet, when I meet the occasional enthusiast who has a favorite Four Roses warehouse, I know better than to argue.”

One of the nicest guys in the industry, Elliott is still more than willing to pull samples from the east side of warehouse M or the lower tiers of warehouse T or reallywherever his customers think is the location currently spitting out the best barrels. It happens so often it’s actually made him start to wonder if maybe there is something to it all. He tends to think the randomness of natural ingredients, weather, and human judgement is more often the causes of slight variance from barrel to barrel.

Elliott does admit that since he blindly evaluates so many barrels every day, he is a bit myopic, focused more on the bourbon’s age, recipe, and actual production date. When he’s in the lab his key focus is on understanding how and why certain whiskeys are developing like they are; he rarely takes time to concern himself with the actual warehouse it’s developing in.

“If I had been considering location for every batch that I’ve evaluated in the last fourteen years, I don’t think I would see a correlation,” Elliott adds, “but I haven’t been, so I’m not going to tell someone they are wrong.”

In fact, it seems no one is. There’s still so much unidentifiable magic in what makes one barrel great and another pedestrian, that few bourbon drinkers, or makers, are willing to dismiss any factor, let alone location. Even the science-minded Elliott, with a degree in chemistry, admits that bourbon-making is a large part artistry, and that we can never completely understand or even recognize everything that affects the final flavor.

“I’ve never really been into picking based on location,” adds Dedman, joking that he’s not one of those guys with an encyclopedic knowledge of where everything comes from and what locations are supposed to be great. When he blind tastes barrels, he explains, “we want as little information as possible. I’m just kind of into it if it tastes good!”

So is Elliott, which is why, lately, he has begun hiding the information on recipes and locations when conducting tastings, to keep barrel pickers impartial to their preconceived notions. He was getting tired of certain guests who would immediately select a barrel based on locational information, often before they had even tasted it.

“Some of it is a little silly,” admits Atlas, though, even having said that, he will continue to believe that there are, in fact, certain spots that just produce better barrels than other spots. “If groups are blind tasting and preferring certain locations over others, then there has to be something unique to that location at that time.”

Aaron Goldfarb is the author of Hacking Whiskey: Smoking, Blending, Fat-Washing, and Other Whiskey Experiments.