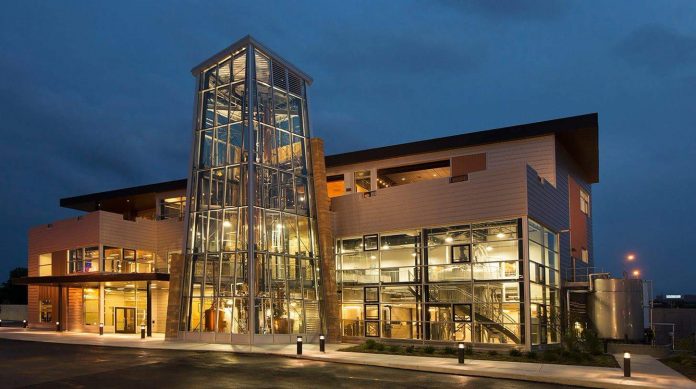 Northern Kentucky’s New Riff Distilling today announces its hosting of the “World’s Biggest Bourbon Toast” on July 31. The toast includes a preview of New Riff Bourbon that is launching on August 1, which embraces the ultimate quality standard: Bottled in Bond Without Chill Filtration, and celebrates the American whiskey heritage shared by Kentucky and Ohio. The Bourbon goes on sale at noon on August 1 in the distillery gift shop.

The toast will take place on the Newport Southgate Bridge that links Newport, Ky., the distillery’s home, with Downtown Cincinnati across the Ohio River. The historic span is affectionately referred to locally as the Purple People Bridge.

Ken Lewis, Founder of New Riff Distilling, will host the toast. He will be joined by Newport Mayor Jerry Peluso, local dignitaries, influencers, supporters and more than 500 spirits aficionados from both Kentucky and Ohio. The toast, which will be held annually in the future, aims to set a Guinness World Record in its first year as the “World’s Biggest Bourbon Toast.”

“While proudly based in Kentucky, we salute our Ohio neighbors who share a deep American whiskey heritage,” says Lewis. “A century ago, Cincinnati was the epicenter of the spirits trade with 75 distilleries and bottlers. Oceans of whiskey from Ohio, Indiana and Kentucky passed through its precincts before going out to the U.S. and the world. At New Riff Distilling, we celebrate this revered tradition with friends on both sides of the Ohio River and toast it with our new New Riff Bourbon.”

New Riff Distilling brought distillation back to Northern Kentucky and inspired a revival joined by neighboring distilleries. Located in Newport, Ky., New Riff Distilling’s mission is to be one of the world’s great small distilleries. Founded in 2014 by Ken Lewis with Jay Erisman, who were formerly in spirits retailing, it is family-owned and Kentucky proud.