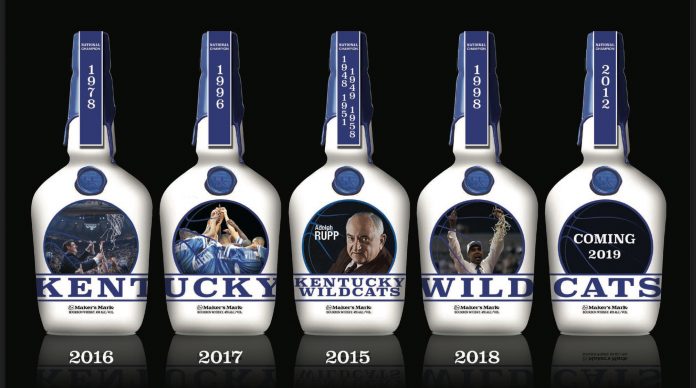 UK Athletics has partnered with Maker’s Mark and Keeneland with a goal of raising $2 million for the center through the companies’ own contributions and a portion of the proceeds of sales of special commemorative bottles of the distillery’s handmade bourbon.

The fourth commemorative Maker’s Mark bottle in the series will feature the 1997-98 men’s basketball national championship team, which earned the moniker “Comeback Cats” during an incredible run through the NCAA Tournament. Bottles will go on sale through retail outlets throughout Kentucky on April 6. The first three commemorative bottles in the series honored the program’s first six national championships.

“The legacy of our 1998 national championship lives on today,” Athletics Director Mitch Barnhart said. “They captured the imagination of the Big Blue Nation by never quitting under any circumstances and we are proud to honor them with this deserved tribute.”

“The bottles in this series have been among the most popular we’ve ever produced,” said Rob Samuels, the eighth-generation distiller who now runs the Maker’s Mark distillery founded by his grandparents. “We’re grateful to our customers for supporting such a great cause and we’re honored to help the work of the CATS program.”

A bottle released next year will complete the five-bottle series to benefit the Center for Academic and Tutorial Services (CATS) program, which serves student-athletes from all of UK’s 22 varsity sports teams. With the partnership in its fourth year, more than $1.5 million has been raised to help ensure Wildcat student-athletes have the resources needed to excel in the classroom.

Another element to the fundraising effort is a challenge for other companies to raise a matching $2 million. Keeneland President and CEO Bill Thomason announced in spring of 2015 that Keeneland would be the first take up the cause.

“Keeneland stands as a proud partner with Maker’s Mark and UK in support of the successful expansion of the CATS program and the advancement of excellence in education,” Keeneland President and CEO Bill Thomason said. “We all extend our thanks to our passionate fans, whose support of the commemorative bottle series contributes to these important goals.”

Any companies or groups wanting to participate in the challenge should contact the UK Athletics office.

A bottle signing for this year’s commemorative Maker’s Mark bottle will take place at Keeneland Race Course’s Keene Barn on the morning of Friday, April 13. Ticketing for this year’s signing event is different than in years past: anyone wanting to attend MUST first get a ticket online here after first creating an account. The free tickets will become available online at 8:30 a.m. Monday, April 9.