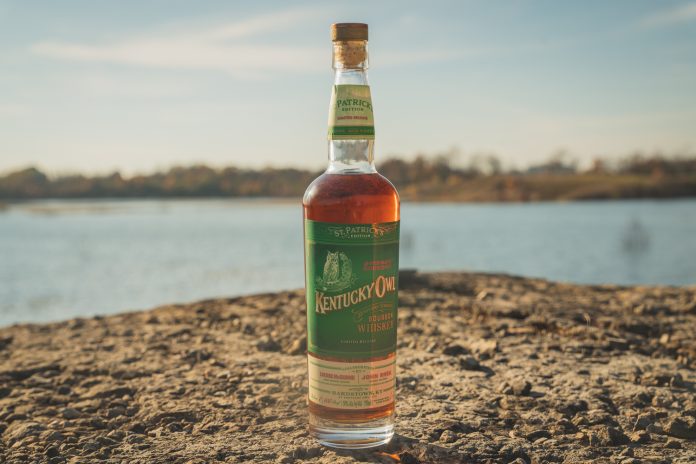 Not be confused with Bottled-in-Bond, Irish whiskey bonding is a way of blending that was commonplace during the 19th and 20th centuries, when most Irish distilleries produced whiskeys for bonders to age, blend and bottle.

Per the provided press release (meaning we didn’t dig on this much), when the Irish whiskey industry collapsed in the 1930s, bonding faded away — until McGuane began resurrecting the tradition again in 2015.

To get to the final amber at the end of the rainbow, Rhea and McGuane blind tasted individual cask samples, then again through multiple blending variations. The result features Kentucky straight bourbons aged 4 to 11 years, with some rich caramel notes and vanilla from rare older bourbons; spice and fruit from higher rye bourbons; and sweetness and citrus from wheated bourbons.

“We tasted through the lens of bringing fruit-forward profiles that are desirable to us as Irish whiskey makers, but we also wanted something still representative of the Kentucky Owl® style,” McGuane said. “This blend tastes like the Kentucky Owl products whiskey drinkers love, with an echo of big and bold juicy fruit flavors so familiar in Irish whiskey.”

The nose features notes of sweet caramel and honey, with just enough spice married in to tease the palate. Once sipped, the Kentucky Owl® St. Patrick’s Limited Edition offers long notes of caramel, butterscotch and frosted cinnamon roll, with hints of chocolate, orange, candy floss and some citrus peel. There’s bright forest fruit on the mid-palate and a longer lingering finish with vanilla pod and balanced wood influence. All carefully mingled to bring out a robust, well-balanced bourbon experience.

The project extends beyond this release, as these chosen Kentucky Owl® barrels will be transported to Ireland for McGuane to fill with future releases of Irish whiskey.

“Bringing together Rhea and McGuane, bourbon and whiskey, Kentucky and Ireland has been an absolute honor,” commented Damian McKinney, Global CEO of Stoli Group. “Through the release of St. Patrick’s Bourbon Whiskey, Stoli is pleased to present a rare new blend that marries the best of two amazing worlds.”

Stoli Group purchased Kentucky Owl® in 2017. Originally founded by C.M. Dedman in 1879, the Kentucky Owl® Bardstown distillery went dark during the Prohibition era and remained dormant until a descendant revived the brand in 2014. Since then, the company’s small batch releases have sold out quickly and received rave reviews.

As noted in Whiskey Advocate:

Irish whiskey bonding is technically a way of blending which was commonplace in previous centuries and operated similar to the way Scotland’s blending tradition evolved. Independent merchants would purchase spirit from different distilleries to age, finish, and blend themselves. “You source whiskey from other sources and you custom-blend it to make your own house style,” McGuane defined it. The practice disappeared when the Irish whiskey industry as a whole declined in the early 20th century, but McGuane brought bonding back a few years ago with the J.J. Corry brand, making her Ireland’s first modern whiskey bonder.