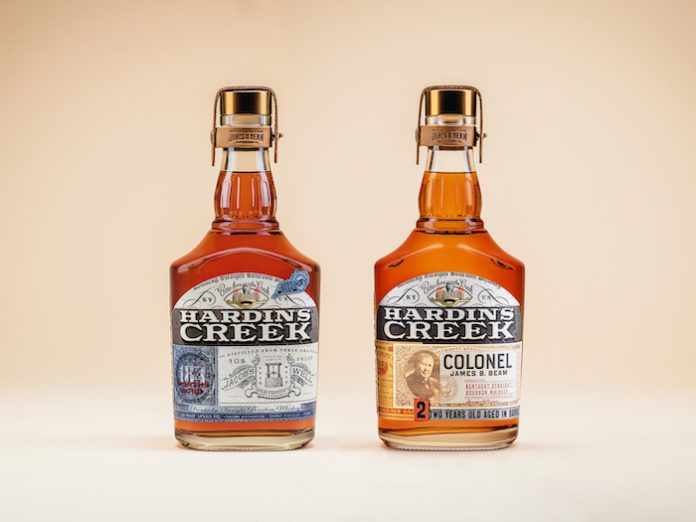 William Faulkner once said “civilization begins with distillation“. Find the water, find the roots of distilling and civilization.

An exciting new chapter from the Book of Beam will soon open, whose namesake pays homage to the earliest days of whiskey making from Bourbon’s Dynasty Family and to the body of water where it all started – Hardin’s Creek.

As the story goes, the first member of the Beam distilling tree, Johannes Jacob Beam, started making his whiskey in 1795 using a well he built from Hardin’s Creek water. That same creek powered the mill used to mill the grains of corn for the first mashes of the earliest whiskey making days.

Honoring this important legacy, Hardin’s Creek was chosen as the namesake for James B Beam Distilling’s new upcoming premium American Whiskey lineup. The vision is to showcase the breadth and depth of Beam’s whiskey-making credentials including full transparency of age, blending, mash bill, distillation, barrels, rackhouse locations, and more.

“We couldn’t be more excited to launch Hardin’s Creek, particularly after the refresh of the James B. Beam Distillery and the opening of the Fred B. Noe Craft Distillery,” said Freddie Noe in a prepared statement. “This has been a long time in the making, and I can’t wait to share it with the world. “Every detail, from the blending techniques to the labels, draws inspiration from centuries of our family’s history, paying homage to our heritage while looking towards our future.”

Both upcoming limited-edition expressions will be available on shelves in the United States starting July 1, 2022. Consumers in select markets who are looking to purchase ahead of July 1st can join the waitlist on ReserveBar from May 20, 2022, through May 30, 2022, with pre-orders starting on May 31, 2022.

Hardin’s Creek will launch with these 2 upcoming Bourbons:

Jacob’s Well is a blend of two ultra-aged expressions: one 16-year-old traditional bourbon and one 15-year-old high-rye bourbon blended to achieve a depth of flavor unlike any other in Beam history. This edition pays tribute to the first family distiller, Jacob Beam, and the well he built in 1795. What first served as a water source would later represent a legacy built from one generation to the next as the inspiration behind this premiere, limited-edition bourbon.

The limited-edition, two-year-old whiskey achieves a depth of flavor usually reserved for more mature bourbons by taking it off the still at a lower distillation proof, imparting more flavor from the fermentation process and letting the barrel’s characteristics shine through at a younger age. In making this whiskey, Freddie Noe was inspired by the style of bourbon the Colonel was making on day 121: low distillation proof for a fuller flavor, guaranteeing the rich complexity of the young whiskey stays intact.