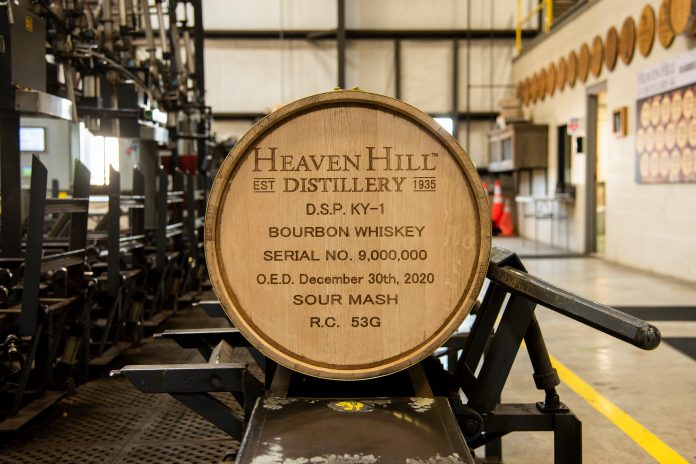 For perspective, there are 53 gallons in your typical Bourbon barrel. 9M barrels are the equivalent of 477,000,000 million gallons of Kentucky goodness. An Olympic sized pool holds 660,430 gallons. For all you math savants out there, that’s 722.256 Olympic pools. Yet more perspective, an Olympic pool is 50 meters long, which means 36,112.8356 meters in length, or 22 miles for us Americanas.

Why is this significant? Other than being a “heavenly” vision of copious amounts of juice, Heaven Hill is the only local, independent, family-owned and operated company to reach this historic benchmark. HH’s first 1,000,000th barrel being filled on July 21, 1961 at the Old Heaven Hill Springs Distillery in Bardstown. Distillery operations would move to the current Bernheim Distillery in 1999 following the horrific fire of 1996 at HH’s Bardstown facility that devoured $30,000,000+ in precious whiskey stock.

The nine millionth barrel will be put up to age in Rickhouse Y, where it will be displayed amongst Heaven Hill’s other milestone barrels.