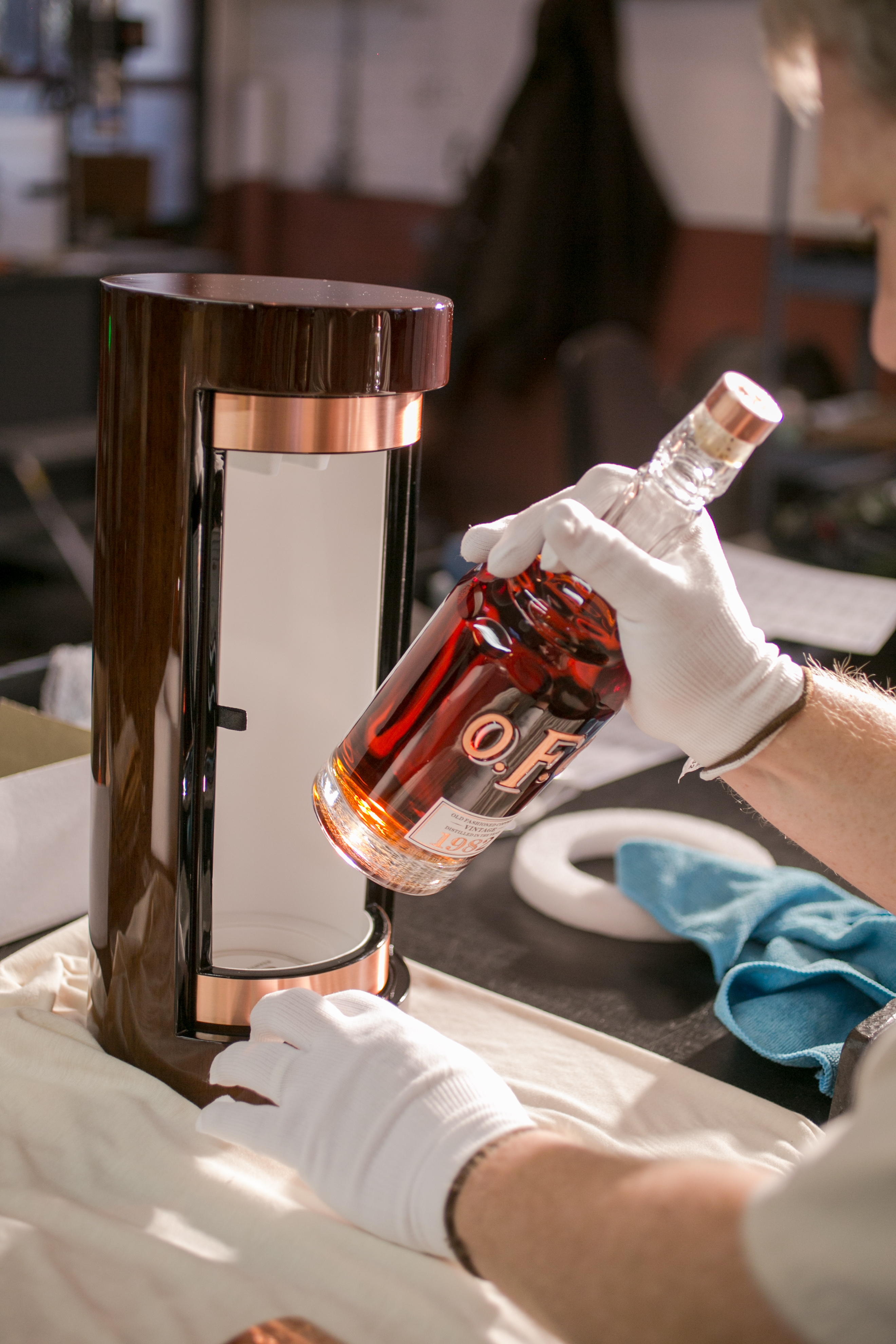 2017 will start off with a bang for Bourbon collectors. The very limited O.F.C. Bourbon vintages from Buffalo Trace will be available to the public via the 200 non-profits that were lucky enough to receive one. Charities from 31 different states will have until March 1st to use these bottles for a fund raising effort, a deadline established by Buffalo Trace.

The name O.F.C. Distillery will always be tied to Buffalo Trace Distillery, thanks to Edmund H. Taylor, who was also known as Colonel E.H. Taylor.  Taylor named the property O.F.C. (after Old Fire Copper) Distillery in 1870 when he purchased the site that Buffalo Trace resides on today.

O.F. C. Bourbon is vintage dated according to the specific year in which it was distilled at Buffalo Trace.  There is a 1980 vintage which comprises of 100 bottles, a 1982 with 50 bottles and a 1983 with 50 bottles as well.  Cutting cost on the packaging does not seem like it was ever an option. Each bottle is made of lead-free crystal and manually polished before copper lettering was in-laid on the bottle.  The wooden display box that houses these bottles are as impressive.

This is the second time Buffalo Trace Distillery has partnered with non-profit organizations to raise money. In 2011, the Distillery gave away 174 bottles of its Millennium Barrel, the last Bourbon barrel filled on the last day of the last century. In total more than $150,000 was raised for various charities across the United States, with the top organization raising more than $7,000 for their cause.

After reaching out to every single one of the 200 charities that received a bottle (anyone can see who got an O.F.C. Bourbon at ofcvintages.com) we found the most common method of selling these will be through an auction or a traditional raffle.  Although some charities are thinking outside the box by selling tickets for intimate dinners or tastings where the O.F.C. Bourbon will actually be consumed.

While not every charity has solidified the method of how they’ll sell their bottle as of the date this was published, a few groups have already sold theirs, and some of those are already appearing on the secondary market.  One Facebook group that is commonly used for buying and selling rare Bourbons used a raffle style method to sell off one of the 1982 Vintage O.F.C. Bourbons at $40 per spot with a total of 250 spots, giving it a valuation of $10,000.  The spots sold out in about a day.

Regardless of the method the O.F.C. Bourbons are sold, the positive impact this has had on the charities is almost undeniable.  Wendy Hickey of Artpop, a non-profit that supports local artists says, “We are so thrilled about this opportunity!  We are now in 11 cities; we are hoping through the sale of this bottle we can add more cities by being able to pay for the production of the vinyls the artists’ works are printed on.”  They are selling their bottle via auction at 6 pm EST, on January 26th and folks will be able to bid online, by phone or in person.  You can visit Leland Little Auction’s The January Wine Auction online for more details about this auction.

One of the most creative ways of using their awarded O.F.C. Bourbon is the event the EDWINS Leadership & Restaurant Institute is having.  To raise money to help provide culinary education and support services to men and women returning home from prison, EDWINS is hosting a vintage Bourbon tasting that will go along with a four-course Southern-themed dinner at their restaurant in Cleveland, OH.  For $500, guests will get pours of not only the O.F.C. Bourbon given to EDWINS, but will also receive pours of Pappy Van Winkle 15-Year-Old Bourbon, George T. Stagg, and Sazerac 18-Year-Old rye.  You can get tickets to this January 24th event by calling (216) 921-3333.  Check out edwinsrestaurant.org for more info.

Kansas City Community Gardens will auction off their 1982 Vintage bottle of O.F.C. Bourbon until the bidding reaches $10,000 or at whatever the bidding is by the required close date of March 1, 2017. Interested bidders should email Courtney Foy at [email protected] to place a bid. At the time of publishing, the bidding for this bottle was at $3,000.

If you want to not only take a shot at winning one of the O.F.C. Bourbons, but also get a chance to visit Bourbon Country then you’ll want to enter the raffle being offered by the Meals on Wheels People out of Portland, OR.  They are offering not only their 1980 Vintage O.F.C. Bourbon, but two round-trip airline tickets to Lexington, KY, a two night stay at The Castle Post and a VIP tour of Buffalo Trace Distillery.  Only 300 tickets at $100 each are being sold.

The Krewe of St. Fabian, which is the fundraising arm the St. Fabian Catholic Church, will be auctioning off their O.F.C. Bourbon from Buffalo Trace at a live auction in conjunction with their Mardi Gras Drawdown on January 27th, in Hattiesburg, MS.  You must be in attendance to participate in the live auction.  Tickets can be purchased at saintfabian.ourdrawdown.com.

The Ohio Veterans Outdoors organization is running a raffle for their 1980 Vintage O.F.C. Bourbon and is selling only 100 tickets.  Tickets can be bought for $100 at their website until the drawing at 9 pm EST on February 17th.  Proceeds go to help wounded veterans.

The Maybrook Volunteer Fire Department from New York is raising money for ALS, in honor of their former fire chief, Chief Max McCombs.  They will be selling raffle tickets for $25 a ticket and online purchases will be available at the fire station’s website.  The drawing will take place on March 1st.

ElderServe out of Louisville, KY, will continue to bring care to seniors thanks to the 1982 Vintage O.F.C. Bourbon they received.  They will be hosting an on-line auction on their website that will end January, 30th.

The Shriners Hospital for Children in Lexington, KY is auctioning off their 1983 Vintage O.F.C. Bourbon.  Bids can be accepted by email and must be submitted by February 7th, 4 pm EST.  The highest bid received via email will then be the opening bid at their Corporate Council donor support group meeting the following day.  The auction will resume approximately at 8:15 am EST on February 8th.  Email [email protected] to bid.