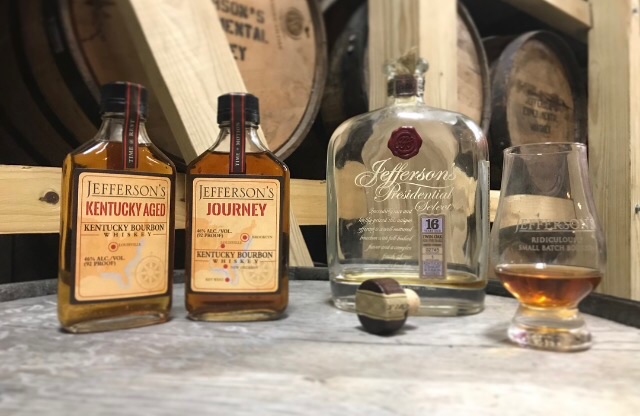 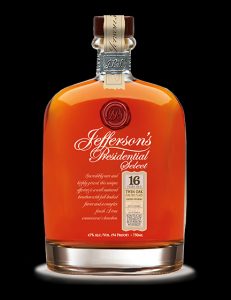 This is Jefferson’s first Presidential Select in three to four years. Past releases of the have included 17 and 18 year wheated Bourbons, 21 and 25 year ryes, and 21, 25, and 30 year selections. Zoeller is especially excited for this Presidential Select after having the chance to manipulate the aging process by adding that second barrel. With the others, he says, “I was just the lucky bastard that got to pick the barrels.”

Jefferson’s Journey started when two barrels full of the brand’s first distillate were sent down the Mississippi River in April of 2016. The barrels lived rough – so rough, in fact, that new barrels had to be overnighted when the boats touched ground in Key West. After surviving two hurricanes and wintering in Fort Lauderdale, the barrels traveled up the east coast towards New York. They made it to port a year to the day after setting sail from Kentucky in April 2017. 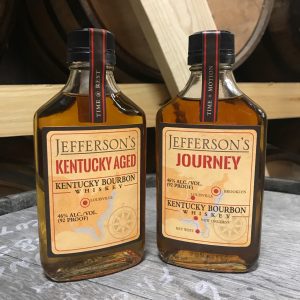 “Of all the things we’ve done, this is far and away the most expensive – and the biggest pain in the ass,” says Zoeller. The Journey Bourbon is an homage to the trip that the first distillers in Kentucky took with their barrels on the river from the falls of the Ohio to New Orleans. Bourbon at rest in Kentucky slowly imbues the sugars and flavors from the charred oak over many years. Rolling waves and rough seas tossed the Bourbon on Jefferson’s Journey against the barrels repeatedly, increasing the flavor at an accelerated rate. When Zoeller first saw barrel proof Bourbon from the Journey barrels and the 16 year Presidential select barrels, there was no visible difference in coloration.

The Journey Bourbon is best appreciated when tasted against the Kentucky Aged Juice rested at Kentucky Artisan Distillery. While both products were distilled mostly with corn grown within a mile of the distillery, aged 18 months, and bottled at 92 proof, the Journey Bourbon had a bold honey flavor and deep color that belied its age, complete with a slight hint of brininess from the coastal voyage. The release for this product is yet to be determined – less than 1500 200ml bottles were filled from these well-traveled barrels.